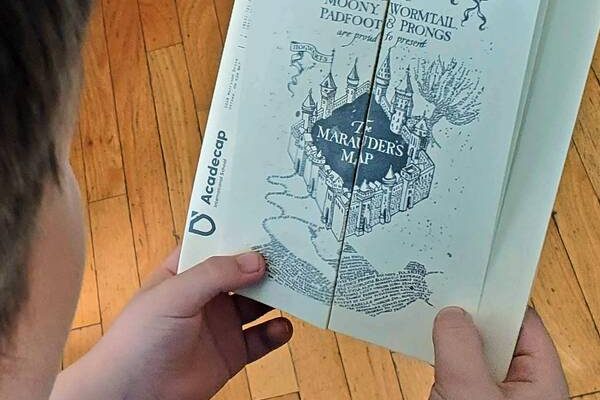 Students in Grade 1/2 have started their new unit on maps. Lately, we’ve been learning about how to read and use a map. Last week, students were tasked with writing a creative journal entry in French. Students were to imagine they found any kind of map, and think about where it would take them, what they would find, and who they would meet. I encouraged students to be as creative as they wanted. One student, a fan of Harry Potter, decided the map he found was Marauder’s Map, found in Hogwarts. Using the map, the student explored Hogwarts and all of its secrets! He even met Harry Potter, Ron Weasley and Hermione Granger along his adventure. Maybe he learned a few spells too?

My name is Shannon Neill and I am currently the Grade 1/2 teacher at AcadeCap. I began my teaching career in 2017 after graduating from McGill University with a Bachelor’s of Education, specialized in French Immersion Pedagogy. Since my first year of teaching, I have been working with Grade 1 and 2 students, from Montreal, to Winnipeg, and now Ottawa, where I have been with AcadeCap since 2018. Working with students in Grade 1 and 2 is definitely something special. The students are curious, honest and so willing to learn and share - I consider myself pretty lucky to be able to learn from my students every day!

Procedural Writing- How to build a Lego house

Students are working on their IB unit about Homes Around the World. As part of...More

Student-Led Conference Day is scheduled on Wednesday, May 27, 2020. On this day, we encourage...More

Did you know that the catapult was invented in about 400 BC? The catapult has...More